Shopping and Having Fun in Galveston, Texas 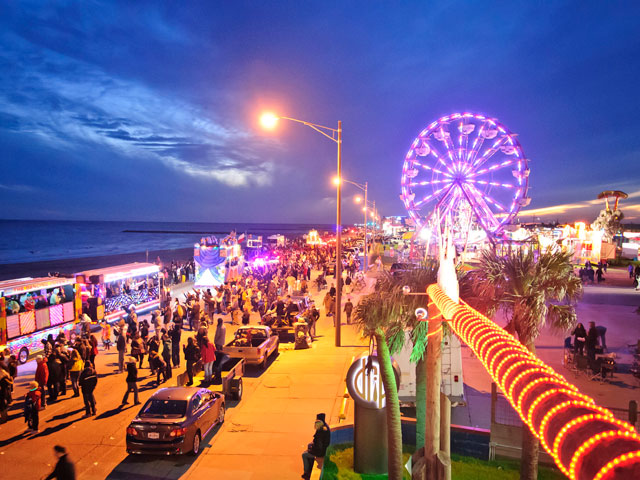 Galveston, Texas, offers 32 miles of beautiful beaches where adults as well as children of all ages may build sand castles, picnic, wade in the Gulf of Mexico, fish, surf, or swim. A large portion of the beach is topped by a seawall that was built to protect the town from hurricane damage. The seawall and adjacent boulevard are great places to bike, walk, roller skate and cruise. It is certainly the attraction of the fun in the sun that brings multitudes of families back to Galveston year after year, but Galveston also has a lot to offer those looking for cultural, shopping, and dining experiences.

Galveston was home to one of the United States foremost architects, Nicholas Clayton. He designed many building in Galveston, including the Bishop’s Palace that was home to Bishop Bryne of the diocese of Galveston, before the official diocesan office was moved to Houston and the Galveston-Houston diocese was born. The Bishop’s Palace was originally built as a private residence in 1886 at a cost of $250,000. The architecture is still ranked among the top 100 most historic homes in the United States and daily tours are held for a nominal fee. The home offers a stunning look at stained glass windows, beautifully painted ceilings, and a glimpse into the historic past of Galveston.

Another home available for touring are the 1938 Michel B. Menard home, which is the oldest home still standing in Galveston. It is of Greek Revival and filled with old south charm. The 1839 Samuel May Williams home is a combination of a New England sea captain’s home and a creole plantation. This home was actually built in New England and hauled to Galveston on a barge. The 1859 Ashton Villa is an Italianate mansion also on daily tour where a look into the lifestyle of a prominent Victorian family is available. Many original furnishings are intact and a portion of the mansion is available for rental for weddings, receptions, parties, and the like. The 1895 Moody Mansion and Museum is another historical Galveston home that was built by W. L. Moody, Jr., who was a financial pioneer in Galveston. Rounding out a tour of Galveston homes and buildings would surely be the Rosenberg library, which opened in 1904. This is the oldest public library in Texas and features several art and history galleries, a rare book room, a tremendous collection of Lalique. The Rosenberg library was established as a gift to the people of Galveston by Henry Rosenberg.

Another wonderful piece of architecture exists in the 1921 City National Bank Building that is now home of the Galveston County Historical Museum. This museum features a Thomas Edison footage of the 1900 Storm and many rotating exhibits from quilts to Native American exhibits. Available for touring from this same era is the 1930s passenger deport of the Santa Fe railroad. The building is rented out to offices but the main floor has been preserved as a museum featuring an old waiting room, model train layout, railroad china exhibits, and original Pullman sleepers, cabooses, diner and mail cars open for inspection. It is a wonderful look into the railroad history of the country.

More current museums include the Mardi Gras Museum and the Lone Star Flight Museum. Both of these entities feature dramatic glimpses of history pertinent to Galveston and the United States. The Flight Museum is also available for for private receptions and features programs especially designed for children.

Other great places to visit include the Moody Gardens situated on 240 lush acres on Galveston’s West End. This entity has a 10 story glass pyramid which houses the rain-forest pyramid, a ride film attraction, a private white sand beach, the Colonel Paddle-wheeler boat for touring the bayou, a 3-D theater, a beautiful hotel, and lush, tropical gardens. Each Christmas a beautiful festival of lights is held on the Moody Gardens grounds, which also include hiking trails. There is a beautiful hotel, convention center, and several restaurants featuring fine cuisine to hamburgers.

If eating is your thing, Galveston offers terrific Italian food at Di Bella’s, a little place in mid-town that is favored by locals. Luigi’s on the Strand is also a great place to wine and dine, as is Rudy and Paco’s next door to the 1894 Grand Opera House. Take in one of the fabulous shows at the Grand then slip over to Rudy and Paco’s for a really fine meal and great ambiance. The Grand features performers from Willie Nelson, the Oak Ridge Boys, and Jerry Jeff Walker to the Nutcracker Ballet. There isn’t a bad seat in the house and some seats are just terrific with original boxes still available. Again, a great glimpse into the past.

Also remember, that Galveston has two of the finest seafood restaurants known – Gaido’s and Clary’s. One is on the Seawall and the other is on the West End of the Island. Other great choices for dining are Landry’s, the Steakhouse, and fun spot with the kids, the Rainforest Cafe, which also features a lagoon ride that is lots of fun. Just 20 minutes from Galveston is the Kemah Boardwalk featuring several top name restaurants, a hotel, rides for the kids and the young at heart, fireworks, a fast boat ride, and live music. An entire day can be spent at the Boardwalk. Bring a folding chair for the outdoor concerts.

In 1877 the tall ship, Elissa, was built and put into service. It is now a museum that provides an audiovisual presentation in the adjacent museum and a computerized immigration database for those entering the United States through the Port of Galveston. The Elissa and museum are located at Pier 21, just a short walk from the historic Strand which is a national landmark. The Strand features one beautifully restored Victorian style building after another with many providing restaurants, unique shops, souvenir shops, clothing stores, and all manner of entertainment. The Strand is also a center of attraction for the Lone Star Motorcycle rally, Mardi Gras, and a unique Christmas festival entitled Dickens on the Strand. During this street festival, the Strand is turned into a Victorian shopping and entertainment paradise with many vendors and participants dressed in period costume.

Also in close proximity to the Strand is the Pier 21 Theater which features the film “the Great Storm”, about one of the nations’ worst natural disaster, a hurricane that hit Galveston in 1900, killing more than 10,000. After the storm, the entire city was elevated and sand pumped in as a new foundation and raising the city above sea level. It was a tremendous undertaking and even the historic St. Patrick’s Church was raised during this time. Just a short trip over the Pelican Island Causeway will take any visitor to Pelican Island and the Seawolf Park that offers a pavilion, fishing, a magnificent view of the ship channel and the opportunity to explore the USS Cavalla and the USS Stewart. Pelican Island is also home to the Texas A&M; Maritime University.

Besides TAMU, Galveston also offers a medical school, a nursing school, a junior college, and a school of allied health sciences. Galveston actually has the oldest medical school in Texas, with the original medical school building, “Old Red”, still standing. Old Red is another product of Nicolas Clayton, and is a tremendous tribute to the history of medicine. The huge rotunda once used for surgeries is still used as a classroom.

Likewise, the NOAA/Fisheries Sea Turtle facility in lid-town Galveston is a constant place of learning and research. The laboratory opened in 1978 does extensive research into the Kemp’s Ridley turtle and the Loggerhead sea turtle.

Galveston is a great place to live and to visit. If you want to swim, fish, surf, sail, visit museums, have a big party during Mardi Gras, or just eat some great food and stroll down the boulevard, Galveston is the place to do it. This article mentions only some of the available entertainment options. Look online at for more information.