Grimm Movie is Lots of Fun! 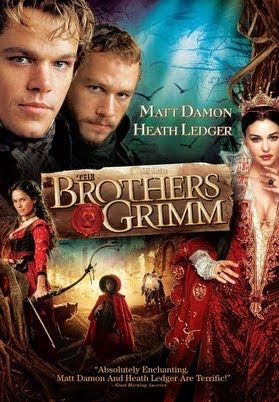 Matt Damon and Heath Ledger have good chemistry as The Brothers Grimm. They are operating outside of their usual type-casts, and it works well. It’s good to see that these two can joke around and have a good time with a bit of slapstick.

The basic plot is that the Brothers Grimm are con artists who go from village to village eradicating imaginary ghosts and such. They are sentenced to death by the French general who has control over the German villages, but then it is discovered that one village may actually be haunted. So the brothers are sent (along with the General’s chief torture artist, Cavaldi, played by Peter Stormare) to look into the matter and see if they can get rid of the offending haunts.

Lots of fumbling and bumbling and scary monsters (I liked the haunted horse that wrapped the child up in spider web and swallowed her whole best!) ensue. There are many clever and silly references to fairy tales. For example, the brothers clean their cottage wearing bonnets and aprons, and a witch knocks on the door to offer them an apple. A crow falls into the well and emerges as a sludge monster that becomes a spooky gingerbread man. Toads are kissed, mirrors are consulted, the sleeping queen’s bed is stacked high with mattresses (under which a pea is hidden, no doubt!) And so on.

My one criticism of the movie is that the character played by Stormare seemed to be an intentional imitation of Roberto Benigni! I found it annoying as it made me wish throughout that it actually was Roberto Benigni! I don’t know if he was approached for the part or not, but for me, the obvious imitation of him really detracted from the film. I think Stormare would have done a lot better to take a different approach. This approach makes it look as if he doesn’t have his own style or comedic ability.

Many reviewers panned this film and said that it just wasn’t worthy of Terry Gilliam, but I really think they were taking it far too seriously. True, it did not have the usual look of a Terry Gilliam film, and I was pleasantly surprised to see his name at the end. My first reaction was, “Finally, Terry Gilliam has made a movie that makes a little bit of sense!” When I looked back on it, I could definitely see his influence in the elaborate and bizarre instruments of torture and the abattoir effect of the combined kitchen/torture chamber! The haunted tower and creepy trees and surrealistic French dinner party also definitely bore his mark. But this movie moved along at a brisk pace, and I did not once find myself wishing he’d just get on with it as I have during every one of his other films.

I think this movie marks a point of maturity and positive restraint for Gilliam. Indeed, in the interviews in the Special Features, he seemed more established and sure of himself than I have ever seen him in interviews. Peter Stormare commented that Gilliam “…wants to work under the flag of joy!” I think that showed through in the movie. I recommend this movie and give it 4 out of 5 stars just for fun!